Easter SMS from the orient

Posted on April 29, 2012 by subincontinentia

Not that I’m in the habit of wishing anyone Happy Easter, let alone a belated one. It’s just that I have to share a text I received on Easter from an Indian acquaintance of mine. My phone, which I reluctantly bought after my loyal Nokia finally gave up the ghost, has a very limited space for text messages so I’m about to delete it, but I can’t without sharing it with you. But first, I’d like to take this opportunity to bitch about my phone. It’s called ‘Spice’ which I dislike with an intensity unbecoming to a Buddhist. It also switches itself off at a whim and plays crap Indian disco tunes whenever it gets bored. (Indian disco makes Saturday Night Fever seem like Mozart). 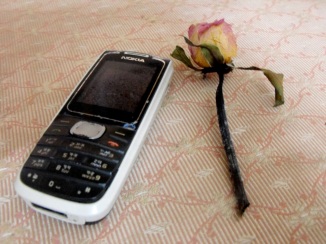 Apparently, Spice got bored in the toilet at a roadside cafe between Agra and the ancient Mughal fort at Fatehpur Sikri. At first I thought the noise was coming from a speaker hidden in the plumbing, and toyed with the idea that the cafe manager had turned on the music to entertain me while I peed. But nope, it was my phone (which does have a great speaker system I must admit) pumping out ‘I wanna make love nah nah nah nah‘ at an excrutiating pitch (plus it’s an excrutiating song). I guess it was getting tired of all the history tours, kind of like having Paris Hilton on holiday in your handbag.

Also, some time just before the Global Buddhist Congregation, my call tone mysteriously switched from a pumping Maharastra fishing song about all the ways you can prepare fish (“You can fry it. You can boil it. You can bake it” etc, which my Indian friends thought highly amusing for a vegetarian), performed by what sounded like a hundred baritones going ‘Holi! Holi! Holi! Matchadee! Matchadee! Matchadee!‘ to a gentle song-prayer dedicated to the monkey god, Hanuman.

Initially peeved (I loved my fishing song), one of the GBC delegates informed me very sincerely that this was an auspicious sign as the lyrics of the Hanuman song spoke of being protected by higher powers. I needed all the higher powers I could get at the time.

Which brings me back to Easter and the text message. It went: HAPPY EASTER. GOD BLESS YOU AND MAY HIS SACRIFICE FOR YOU BECOME A REALITY.

This is a religious country and they take this stuff seriously. I didn’t want to tell her that most people aren’t meditating on God’s sacrifice at Easter. They usually just give each other chocolate eggs (if they’re lucky).

But Easter is about resurrection, isn’t it? And we all need a little cosmic renewal now and then.

Hope you’re getting yours.

writer and eternal optimist
View all posts by subincontinentia →
This entry was posted in Moving on...., Rose Apple Island and tagged Easter, India, mobile, SMS, travel. Bookmark the permalink.