Posted on August 23, 2013 by subincontinentia 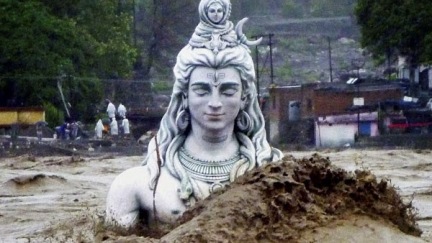 Lord Shiva, whose temple in Uttakharand was one of the few buildings left standing after a boulder lodged behind it and protected it from the floodwaters.

The retired Major lifted his scotch to his moustache with a sober pause. It was July 2013, just a few weeks after the terrible floods in Uttarakhand; the worse national disaster India had endured since the 2004 Tsunami, and the subject was on everyone’s lips. This natural catastrophe had taken over 6,000 lives and forced the evacuation of over 100,000 people. One month later, 6,000 were still missing. Though the response from central government was initially sluggish, the media was soon filled with images of heroic rescue efforts by the Indian army. “People don’t understand the might of the Himalayas; what those mountains can do to weather,” opined the retired Major. “Take the cloudburst. It’s like a tsunami falling from the sky.”

I first heard the term in August 2007, when traveling by jeep in upper Kinnaur in Himachal Pradesh through some pretty bad weather. Along the route, the tragic news was relayed that an entire village had been wiped out and 50 people killed in less than an hour from what people were referring to as a ‘cloudburst’. The village next door just got wet. But in talking with the Major I began to realize that I didn’t know what a cloudburst actually was. I imagined a rather cartoon-like event with a cloud exploding like a kid’s water bomb in Hyde Park on a Sunday afternoon. In our party was a young British diplomat, about to get transferred to the Foreign Office to work on climate change.
“It’s just a lot of rain,” was the answer I got.
“Isn’t that rather like saying a tornado is a lot of wind?”
He shrugged, clearly disinterested.
“I’ve never heard of it before I came to India,” he replied, as if to suggest Indians were using the term somewhat hysterically.

The floods in Uttarakhand were not caused by a cloudburst according to India’s meteorological office in Shimla, but to unusually high rainfall (375 percent more than benchmark levels) from clouds saturated with moisture from the Bay of Bengal. But I began to get increasingly fascinated by the cloudburst question particularly since there was so little about the subject on the net. When I mentioned all this to a friend from the hills, he was unequivocal.
“Cloudbursts are not just a lot of rain. If you go to Manali, you’ll see how both the landscape and the locals are scarred with the memories of these extreme events.”
There is even a meteorogical centre that’s been set up in Manali to study cloudbursts, he said. He told me that one autumn he’d been hiking in the mountains above Dehradun. It was a beautiful clear sunny day. But just across the next valley, he could make out a thin grey vertical line from the sky to the ground that became darker and darker as he watched. He later found out that an entire village had been wiped out in one hour from the cloudburst, when all around him the sun had continued to shine.

For those villagers who lost everything they held dear, an explanation is demanded. Without science, the  event must be explained in mytho-religious terms – an angry God being the usual suspect. In the cloudburst analogy, I see the importance of science as a new mythology – stories that help to make sense of this strange and seemingly random world. For don’t those of use who consider our world-view to be more sophisticated than that of a remote mountain village also demand an explanation when our loved ones are singled out by a lightening strike or a machine-gun toting psychopath in a schoolyard? Don’t we also turn to the skies, and ask the question, why?

Turns out this fire-fighting device is aptly named

First, to qualify as a cloudburst, rain has to fall over 10 centimeters an hour – but it was almost 10 inches in one hour in the devastating cloudburst in Leh in 2010. The deluge is often accompanied by high-force downwards winds, but it is the flash floods formed from the sudden increase in water volume that causes the most damage and loss to life. It seems that mountain-enhanced precipitation can take on a whole other dimension in the mighty Himalayas (which is why ‘cloudbursts’ are rarely reported in other parts of the world, though have been recorded in Jamaica and Romania and even some parts of the US). In ranges of such enormity as the Himalayas, convective clouds like cumulonimbus can occasionally grow to heights of 15 km. The precipitation that forms, therefore, combines unusual levels of pressure and weight descending from a great height over a localized area, with raindrops repeatedly merging with one another until the final effect is like someone taking out the bottom of a giant water tower. A person on the receiving end of all of this is not going to experience ‘rain’ in the normal sense of the word–although it is rain water–but something more akin to  a vertical wave – hence the retired Major’s ‘tsunami’ analogy. 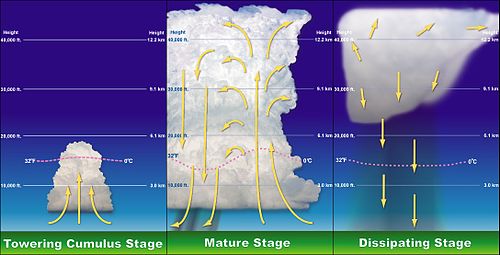 I was surprised to learn that there is still quite lively debate over the fundamental processes of precipitation. The stuff of all geography text books that we ingested and regurgitated like gospel. Even NASA is putting up nifty-looking weather-detecting craft to find out why some clouds produce such spectacular amounts of rain. It is this quest for understanding, this willingness for inquiry, that keeps science from replacing religion.

Yes, a cloudburst is technically “just a lot of rain”, as cancer is “a lot of illness” or depression is “a lot of the blues”. But stand under a cloudburst, get cancer, suffer from depression and you will experience something of an altogether different order. Science loses its power when it simply replaces the gods, and blind faith in its tenets replaces a measured but marveling exploration. Of course, science still cannot answer the villagers who ask, “Why this village, not that one? Why my son, not his?” But without science, when the cloudburst bursts, all we have left is a Higher Power with “a lot of irritation.”

1 Response to Cloudburst – drenched in euphemism