Posted on April 4, 2015 by subincontinentia 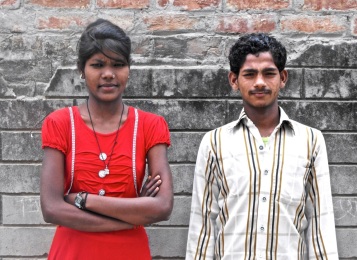 When I first met Rakesh he was the youngest boatman working on the Ganges. Ten years old, shy and very quiet. He’s now fifteen, and very much his own man. He dropped out of school because “the teacher was bad” and spends his free time playing cricket at Tripura Bhairavi Ghat. He prefers to sleep on his boat than in a bed. His father died 3 years ago. He is more serious now, but has a wry sense of humour. He makes fun of my battered aging camera. He tells me I should get a smart phone because my connection is so bad. “Your camera is old. Your phone is old. And you are old,” he chuckles.

Sunita is a force of nature. Ten times smarter than most girls her age, she gets bored at school because “it’s too easy.” When I first met her she was 12. She’s now 17 and set to break a legion of hearts. She can pick a fight with the sun for rising, and I’ve never heard her talk in anything but a shout. Her family don’t seem to know what to make of her and keep sending her to live with different uncles and aunts. She walks like a bandit queen and has piles of sequined dresses stashed behind a curtain.