The greatest show on earth

Posted on April 17, 2015 by subincontinentia

Amelia Earhart once said, ‘You haven’t seen a tree until you’ve seen its shadow from the sky.’ Well, I think it must also be true that you haven’t seen a lunar eclipse until you’ve seen it in Varanasi. Here, where salvation eclipses administration on a daily basis, such celestial advents are no mere sideshow—a passing distraction after dinner with the kids first telescope. They take full and emphatic centre stage.

All terrestial events are put on hold. The moment the earth’s shadow touches the moon, over three hours before it can even be seen (the city’s astrologers having calculated the precise timings with charts of the Chaldean order) shopkeepers roll down their shutters, the lattice iron doors on the roadside shrines are padlocked, and a heavy curtain is drawn across the ten-foot marigold-painted Hanuman statue behind Meer Ghat.

It was a little after five on April 4, 2015, and Manu ji was lounging on a sofa in the lobby of his modest guesthouse when I ordered chai for myself and two friends. “No chai during the eclipse,” he replied with a languid gaze in my general direction, and went back to reciting his mantras, his sights set inwards as if on the passage of interior worlds.

The steps of the ghat, normally the scene of bustling activity, were strangely subdued. A dozen men and women were standing in the Ganges up to their waists, eyes closed palms together at their chests, utterly immobile, facing East—the direction of the rising moon. “The gods are in trouble,” explained Sunil,” as we walked by them. “We need to pray for them.” This was a novel twist on things. For one day at least, divine intervention was the job of mortals.

“They don’t understand it’s just the shadow of the earth passing in front of the moon,” said Leo as we set out in a boat towards the phar—literally the ‘other side’. But I couldn’t really see any ‘just’ about it. A graduation, a wedding, a new job, aren’t these all ‘justs’ by comparison? Are we so certain of our own importance in the scheme of things— when one of us makes a single lap around the sun we break out the champagne. But this. This was something worthy of celebration. Something to stretch the canvas beyond the anniversaries of ants. The earth’s shadow is passing across the moon! This was literally the Greatest Show on Earth. Roll up! Roll up!

And in Varanasi. They rolled.

When we reached the bank, our little eclipse party—the unlikely cluster of pilgrims customary for India: a Jewish-Parisian violinist, a Romanian-Greek kite-surfing yogi, a Danish boat rowing Olympic gold medalist—prepared to take our own Nielsen rating, as a dusky jacinth moon rose over the sandy desolation of the phar. It should have been full, but tonight there was a sinister bite deep into its right flank. In North India, the eclipse could only partially be seen, but there was no sense that we were in any way getting short-changed. The hairs on my arm felt like they were tuning in to the collective focus of the city’s residents on this single point.

Sunil and Santos joked and laughed with the rest of us, but in between they murmured their prayers, occasionally surveying the moon’s progress with reverent concern. Just four minutes later, the battle of shadows was over, and the moon was beaming free and clear in the eastern sky.

As we rowed back to the northern bank, a tumultuous cry rose from the ghats. “Hare hare Mahadev!!” By the time we arrived, the scene had been transformed from the one we’d left. Gone was the hushed mood of private devotion. This was party time. Boys dived off boats into the water squealing with joy. A boat with a 6 foot speaker pumped out mantras set to Hindi pop songs. Chants of Hare Hare Mahadev!! throbbed like a football anthem with a backtrack of splashing and laughter and the gentle chorus of women. I recognized a young college student, a Brahmin, who every evening without fail came down to pick up trash from the ghat. Even those well aware of the astronomical facts aligned the full force of their spiritual attentions with the occasion, no less wondrous or mysterious for a few astronomy lessons. 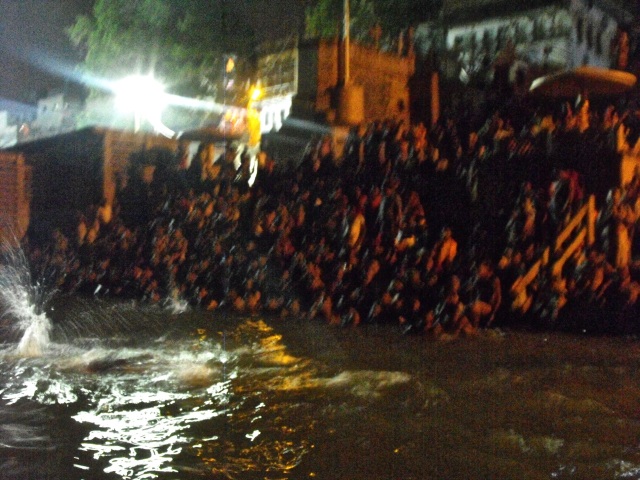 As if seized by some invisible force, Leo reared up a little rockily in the lap of the boat, threw back his head, and boomed out: Hare Hare Mahadev! Ohm Namah Shivaya! A few minutes ago he’d been squarely on the side of science. Now his lungs roared with the name of god. The young Brahmin had come from the other direction, from God to science. And tonight neither were disappointed. For either way, the moon had won the battle of shadows, and I too wanted to shout in celebration of its freedom.

That day had felt all akimbo, as if lingering between cause and resolution. Although not technically a ‘believer’ I had found the locked shrines unsettling. If Varanasi had an industry it was worship, and it was as if the gods had closed up shop, thrown up their hands at the state of affairs and dispersed to more sympathetic realms. It was as if Rome stopped serving pizza or Paris had banned lovers. I had sat down to write a few times but had produced only doodles. As the earth’s shadow crossed the old moon’s heart, old ghosts had walked over mine. But as the full circle of light broke away from that murky shroud, I felt the shackles of the past loosen their hold and was engulfed with the desire to praise something for it. The singing women and dive-bombing boys, Leo’s appeals to Shiva in a Danish accent, Sunil’s foot-in-both-worlds smile, the young Brahmin’s tears—somehow became the same language in different tongues.

That night none of us slept. Perhaps it was the disco mantra boat that patrolled the river well into the early hours defying the city to slumber, or the deep-night thunder that shook the balcony railings, or the skirmish of shadows celestial and private. The next morning the city was back to normal – well, at least what passes for normal in Varanasi. The gods were back in business and the chai was flowing freely. The  haze had been dispersed by nocturnal rains. From my balcony, I could just make out an orderly line of buffalo ambling toward the water’s edge.