Think the vaccinated are less selfish than the unvaccinated? Think again.

Posted on September 17, 2021 by subincontinentia 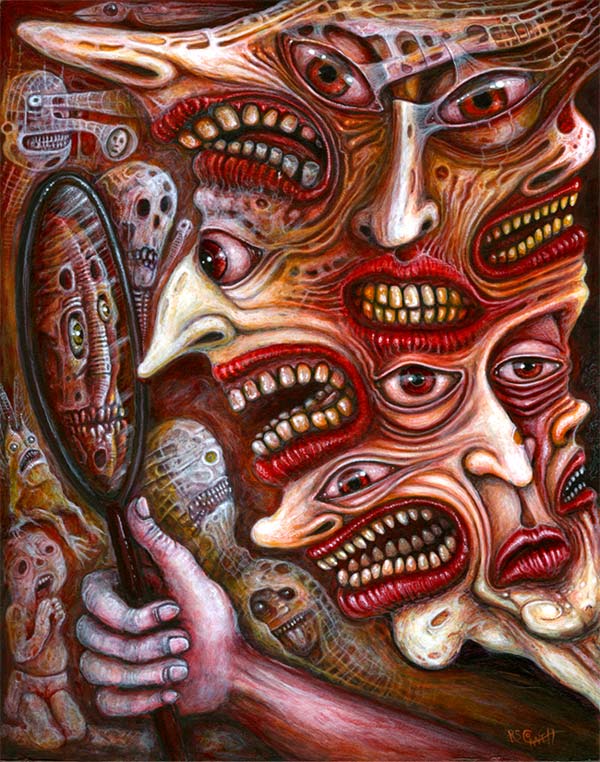 Faces in a Mirror by R.S. Connett

“The surest way to work up a crusade in favor of some good cause is to promise people they will have a chance of maltreating someone….to be able to behave badly and call your bad behavior ‘righteous indignation’ — this is the height of psychological luxury, the most delicious of moral treats.” Aldous Huxley

There is a trope so intrenched in the pandemic narrative that it has taken on the irrefutable scent of religious dogma. It seems impossible to argue with only because no one ever does. You see it everywhere, on every news program, in every newspaper and it is plastered over the walls of social media like some viral graffiti. The unvaccinated are selfish. They don’t care about their communities or the effects of their actions on others. The vaccinated, in contrast, are altruistic civic minded folks willing to make sacrifices for the greater good.

The Unvaccinated. It has the ring of cheap horror. Like the Undead. A faceless mob of science deniers and rabid individualists, ranting conspiracy-thumping loons from the screaming heart of MAGAstan. But does this trope really reflect reality? Or is it merely a caricature brutishly but effectively manufactured to foster a particular set of emotions and prejudices?

Let us imagine who some of these “unvaccinated” might be, since it is obvious that no human being can be summed up in a single adjective. We can draw some character sketches like we’re writing a play. Enter Paul, healthy, unmarried, and in his early 40s. He’s the kind of guy who would literally put down whatever he’s doing to go help a friend no matter how much it inconvenienced him. Paul is a bit of a geek, an avid reader of science journals. His reasons for not getting the jab, he says, are based on the latest medical evidence. He is generally pro-vaccine but he feels that he isn’t in a high-risk category for severe illness and death, and wants to wait until the next generation of vaccines that he hopes will be more effective against the new variants.

Now stage left comes Patricia. She runs a local alternative health association and is regarded as a pillar of the community. In her 60s she contracted Covid last Spring and was sick for a couple of weeks but managed it well. She has since been tested and found to still have lots of antibodies against the virus in her system. She plans to get the vaccine when her own immunity fades but she’s not “in a hurry” as she puts it since she believes her immunity protects her and those around her. I would classify Paul and Patricia among the low-motivated unvaccinated. They would rather not take it at present, but they are not fundamentally opposed to the idea.

Now meet Claire. Claire is a holistic health practitioner. She herself has a history of health issues that her doctors seemed never to be able to identify and she has developed a distrust of mainstream medicine as a result. Claire is more frightened of vaccine side effects than of Covid. She thinks that it might actually be better for her to get the disease while she is still relatively young so she can develop natural immunity. Claire is among the high-motivated unvaccinated in that she takes being unvaccinated very seriously. Another type of high-motivated unvaccinated is Tim. Tim is a black man edging towards 40. He has a deep distrust of government and its agencies. He finds it hard to articulate his resistance to the Covid-19 vaccine but he talks bitterly of the infamous Tuskegee study that ran for 40 years in Alabama in which 400 black men with syphilis were lured to participate with the false promise of treatment. Tim’s neighbour’s 27-year-old daughter was admitted to the hospital with temporary blindness and pains in the uterus after the first Pfizer jab. Tim follows several people on social media who spin out grand conspiracies about Covid19. Suffice it to say, he is quite a way down the rabbit hole.

None of these fictional (though believable) characters I’ve described are against vaccines in general, not even Tim. I’ve purposely left out the ideological ‘anti-vaxxer’ as they seem to be getting quite enough attention already. I’ve also left out the more sensationalistic characters, the notoriety of which is way out of proportion to their frequency (see, ‘anti-masker’ punches air stewardess). The positions of most unvaccinated people (how much more humane it sounds when you add the word “people”) like those described above are actually a complex of intuitions and rationales that involve all kinds of issues of security, trust, information pathways, risk assessment, cultural background, and interpretations of current events. Now, someone who disagrees with them, might argue that they have made the wrong decision. But being wrong doesn’t make someone selfish.

What about the low and high motivated vaccinated? Caroline enters stage left. Caroline is not against the Covid-19 vaccines either. She believes they are effective against severe illness and death but doesn’t feel personally at any great risk from Covid since she is only in her 40s with no underlying health conditions. She lives alone and isn’t very social. She has been vaccinated but left to her own devices she would probably not have made that choice on her own. She was persuaded to get the jab because it made her elderly father felt safer being around her. Caroline is what we could call low-motivated vaccinated. She got vaccinated primarily for someone else’s benefit and it required a bit of a sacrifice on her part but not much since her feelings about vaccines were generally ambivalent. If she’d had deep concerns about vaccine safety like Patricia, then her act of getting the vaccination would have been more admirable since she would have been sacrificing her own sense of safety for the sake of someone else, and this would be true regardless of whether her fears were grounded in reality or not. And let’s remember that the person whom Caroline got the vaccine for was a close family member. Low motivated vaccinated like her might get the vaccine to protect a loved one, or to get other people off their backs, or to be able to travel or have a generally less complicated easier life, but most wouldn’t be so grandiose as to imagine they were only thinking of the greater good.

Enter Peter. Peter is in his early 70s and has been managing his diabetes for thirty years. His brother and fellow diabetic died of Covid-19 after a horrific hospital stay, and Peter is understandably scared that he could suffer the same fate. He made his appointment to get the jab as soon as he could and feels safer for having it. He finds it hard to understand why anyone would refuse the vaccine. He could be described as high motivated vaccinated. There are many more variations, of course, in all four above categories.

The reality is that most people who get the vaccine do so because they believe it ‘works’ and are afraid of contracting Covid-19. They may feel an added sense of satisfaction to be told that being vaccinated is good for the community, but if they were honest they would admit that it was not a sacrifice for them to get the jab – they fully believed it would protect them from the disease. I’m not sure how a simple act of self-preservation has become re-packaged as an act of compassion, but it has, if only in contrast to the supposed self-serving attitudes of the Great Unvaxxed. People may well believe that their actions to protect themselves intersect with some greater good, but that’s a bonus consequence, not the underlying motive. On the other hand, someone who is very vaccine hesitant but who gets the vaccinated after having been convinced it is the right thing to do, against their beliefs or in spite of their fears, is a far more generous-spirited soul. I personally know one of them, actually. In the end he was persuaded by his physician, but it was a very difficult decision for him. The bullying, hectoring and shaming against people like him on social media had only made him double down.

Communication between these four main groups depends largely on their level of anxiety. The low-motivated vaccinated and low-motivated unvaccinated actually have the best chance of communicating with one another and finding common ground, even though they appear to have opposing positions, because they are less ideologically driven. The high-motivated unvaccinated and the high-motivated vaccinated are both highly motivated by the same impulse – FEAR. The object of the fear is different. Some people are more afraid of the virus, some are more afraid of the vaccine and the governments and agencies that promote them, but it is the same emotional driver. But their fears have morphed and twisted – thanks in large part to the media and government spokespeople – into distrust and resentment of one another. What is ironic is that the most unforgiving in both groups view each other exactly the same way; as deluded paranoiacs who couldn’t care less about the welfare of society.

A worryingly large proportion of the vaccinated, however, are fast distinguishing themselves by their astounding lack of compassion. They call for the unvaccinated to be denied medical care, even to be arrested and jailed. Their tactics are those of the schoolyard bully and the religious zealot. Their weapon of choice is shame. It is amazing that they can look at themselves in the mirror without being blinded by their own sanctity. But they shouldn’t look too long, because they may get disturbed by what they see gazing back. They even call those not yet vaccinated “plague-rats”, seemingly at ease with the foul alignments they are making by the use of such language towards fellow human beings.

I believe that most vaccinated people, even if they feel frustrated by those who resist the procedure, are deep down uncomfortable with this kind of behaviour even though it is being widely endorsed. They would prefer to make their case with reason and actual compassion which they understand has far more chance of persuasion. Such people realize that in reality, unvaccinated people are just as selfish or unselfish as the average human being; indeed as themselves. We are not cardboard cutouts, but complex squirrely creatures full of contradictions and surprises.

If someone got the vaccine to help their country reach herd immunity or to stem the mutation of variants or to stop the health services from being overwhelmed, then they perhaps deserve a memorial on the moral high ground. But the rest could do well to step into the real world and accept that it was primarily because they believed they had a better chance of avoiding severe sickness and death from a nasty virus. And what on earth is wrong with that? Self-preservation is a perfectly fine motivation for a medical intervention; at least it used to be.

The myth of the compassionate vaccinated and the selfish unvaccinated is one of the ugliest and most corrosive ever circulated in the public domain; reminiscent of some of the darkest and most shameful periods in history. It is as transparent as it is insufferable. It crumbles under even a cursory analysis. It is driven by people unable or unwilling to observe their own motivations and who have allowed their good natures to be hijacked by cheap shot politics and mob decree. It makes people act in ways they would have ashamed of only one season ago. It’s a really bad look. And it bodes ill for us all.

writer and eternal optimist
View all posts by subincontinentia →
This entry was posted in epoche and tagged coronavirus, covid, covid-19, selfish, unvaccinated, vaccinated. Bookmark the permalink.