I went downstream – to imagine
How things could have been different
I went upstream – and worried
How things might change
But then your grandfather’s words
Rippled underneath….
“The boat is the middle. Stay on the boat.”

“I only care about money,” announced chain-smoking guru lighting up a Gold Flake with a 10 rupee lighter. “For my girls orphanage,” he clarified, head titled a little back, Arabica eyes following the smoke as it escaped his momentous nostrils. Jude eyed a glass bookcase cum altar stuffed with mystic knic knacs and rupee notes, mostly 50s ad 100s. He sat cross-legged on a pile of silk cushions like Pavarotti in pajamas, sucking away at his cigarette. Waiting. She added a couple of hundred to the pile. He didn’t seem impressed but also didn’t complain, so she figured it had been more or less the right amount.

They were sitting in a shrine room, that looked more like a seventies stoner pad. It was filled with deities, posters of deities, wall-hangings 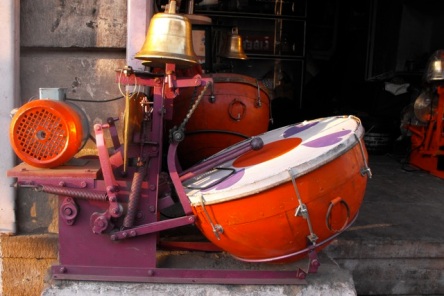 of deities, and draped in luxurious fabrics and tassled floor cushions in between engraved brass incense holders and cheap tin ashtrays. Next door, a smaller room looking out onto a narrow alley, was filled with the oddest-looking machine, like a candy making appliance from Charlie and the Chocolate Factory. It was making a hell of a racket too, clanging cymbals and banging drums with levers and bolts and ball-joints. It was, she later learned, an automatic puja machine, churning out rhythms for the faithful to cure their piles, get their sons straight ‘A’s and return their wandering husbands.

Chain-smoking guru, the most respected astrologer in Varansi as Jude had been told, made her swear not to tell anyone what he was about to impart. Which was fine with her, since it wasn’t that intriguing. A few accuracies about her past were hard to explain, but most of it was groping and vague. She forgot the bulk of what he’d told her within half and hour, except the words with which he prefaced almost everything. Your heart is empty and alone. Her questions seemed to rankle him and put him off his stride so that he would have to begin again with, Your heart is empty and alone! in a melodramatic baritone. No need to rub it in, she thought. After half an hour of spinning possible futures out of a far from certain present, she’d heard enough. She was already bored with the future, and the past was written. He sensed her interest fading.
“It would help if I could touch your breasts,” he said. “It will give me inspiration.”

At the end of the session, she found Atisha waiting for her outside, hands in pockets, leaning against a wall.
“Where to now Judy ji?”
She took one look back at the puja machine, clanking and dinging away to the distant elusive ears of the divine.
“Let’s get back on the boat.”