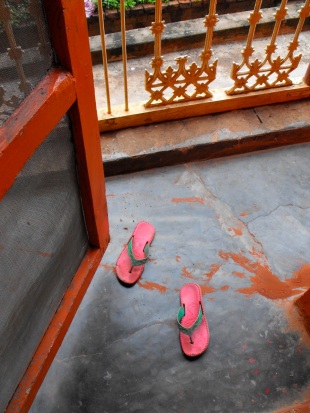 “You canno forsch life inku enggi shay you wan jus fom guh powah of your fillings.”
German Baba struggled to form the words around his toothbrush that had been busily working its way around his mouth for the past ten minutes. He spat an exclamation mark of white foam into the river. It twirled a few times before floating dutifully downstream, bobbing on the wake of a passing motorboat.
“Excuse me?”
He turned to to Jude for the first time and gave her the look of a schoolteacher to an inattentive student. The toothbrush now dangled across the fingers of his upturned left hand like a ritual implement. Only his pinkie curling ever so lightly around the handle kept it from falling into the river. She suddenly envied the toothbrush. An ordinary thing, handled like a marvel.
“You cannot force life into any shape you want just from the power of your feelings,” he repeated, with a hint of impatience.
He tucked the toothbrush into his dhoti and he ran his hands through his long wire-grey hair, starting from his forehead, striped with orange dye. But hadn’t he done that, she thought? Hadn’t he forced his life from schnitzel and suits into daal and loincloth? From efficiency and logic into timelessness and mystery, simply from wanting it badly enough? But she didn’t feel like arguing today.
“No, I guess not,” she conceded.
“What’s wrong?” he asked her, suddenly more gentle.
“I’m tired of being misunderstood,” she moaned.
“Aaaaah.” German Baba laughed. “Are you worth understanding?”
Jude felt mildly insulted, but knew it wasn’t intentional.
“Sometimes,” she replied, truthfully.
There was a long pause. A characteristic of intercouse in India, where there is never any urgency to fill a silence.
“Do you think it was wrong, Heinrich?”
German Baba turned and faced downstream.
Another long pause….
“What do you think, my dear?” he said quietly. “What do you think.”

German Baba had been born Heinrich Pettinger. He had been an average student at school and at college, where he earned a BA in economics and later a Masters in Business Studies. He had worked for fifteen years at the Heslinki Insurance Company, offering “reliable, informed and trusted advice” to his clients. Now he had few possessions, no insurance and no pants.

He took out a pipe from somewhere in his magic dhoti, that artfully concealed an apothecary of items. He lit it with a lighter that read I Want You beneath a half-erased heart. Heinrich took in a long draw off the pipe, cupping his right hand over the bowl. He closed his eyes and tilted his head back slightly, and then exhaled a stream of smoke in the direction of a passing egret. Jude felt like Alice in Wonderland, waiting for the verdict of the hookah-puffing caterpillar. “Who are you?” She half-expected him to ask.

“Do you love him?” he said.
The question surprised her.
“Do you believe in love?”
“As much as I believe in nebulas or indigestion. Look! The buffalo have come for afternoon tea.”
About a hundred water buffalo lumbered single file towards the west bank, and sank into the river like a serene mass suicide.
“I do love him. But I’m afraid,” she said.
The reflection of the buffalo turned the water around them the color of a fresh bruise.
“I wrote a story. It’s my first one.”
“What’s the title?”
“The Ganga Prince. It’s about Atisha.”
“If it’s about the Ganga, then I would like to listen.”
“They’re all about the Ganga. In one way or another.”