Posted on November 22, 2012 by subincontinentia 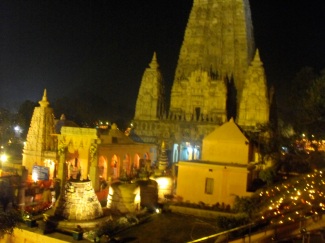 Even a full moon looks dusty in Bodhgaya. Beneath it’s grubby glow, a group of high-spirited Indian youths hijack a merry-go-round in a fair that’s closed for the night. One of them mounts a plastic baby goat while the others push him round and round, squealing with delight.

A small boy wears the cardboard box of an electric heater as a hat and stares into an open fire through a jagged peephole.

A man crawls along the road, his limbs twisted into a permanent gymnastic trick, and is barely missed by the wheels of an auto rickshaw. A trio of Indians are jamming on the street. One was playing a large skin drum, another was blowing a conch, while his friend was performing a kind of nihilistic Indian rap.

“I will steal the smile from your face…only sorrow will exist, no joy, no happiness, no laughter…..”

The conch player noticed me standing there, and staggered over to tell me that he was stoned on hash and had “never experienced love”. Would I like to play the conch with him? Much as I was tempted to blow a grubby seashell with a sex-starved wasted Indian stranger, I thanked him and told him I was retiring for the night.

I was making my way back to the Chinese monastery where I was staying in my usual brisk don’t-mess-with-me fashion–head down, scarf across nose, hands firmly in pockets. I had almost made it, when there came a hearty “Hello!” and I knew it was aimed at me in the way that you do. A young dark-skinned beggar was walking towards me. Well, walking is the wrong word. Manoeuvuring would be better. He was handicapped in such a way that he could only move in a crouch, with his knees up around his ears. He had his right hand outstretched towards me, but not in a begging way. He wanted to shake my hand. I took it, a bit confused.
“Don’t you remember me?”
“Er…”
“Dharamsala…I know you. I’m Ahmey.”
“Oh, right. Hi.”
He did look familiar. After the relentless surreality of Bodhgaya,  I was only mildly amazed to be recognized by a beggar 800 miles away.
“How are you sister?”
“Well, to be honest, Ahmey, I’m very tired.”
“You’re tired, sister?”
“Yes, Ahmey. I am.”
Ahmey looks up at me from his frog crouch with an enormous grin.
“Shall I give you a massage?”

I hurry into the courtyard of the Chinese temple, past a robed monk standing over the fire from a giant wok, chanting in a monotone and ringing a hand bell like the dinner call for the dead.

In Bodhgaya, you don’t need a full moon for crazy…..