At the end of the world we are all Delhites

Posted on December 11, 2012 by subincontinentia 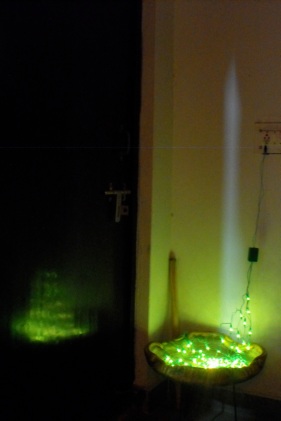 My xmas lights in a bird bath because trees are hard to come by….

The end of the world is nigh and it’s starting in New Delhi. How do I know this? I have incontrovertible evidence. I paid 250 INR for Christmas lights – a shocking price even by ‘Second Coming’ standards. I rode in an auto rickshaw, one smog-ridden breath away from total anarchy, resisted only by the flimsiest memory of civility. My balaclavad driver (or was it a head injury?) honked and screamed with apparent total hatred for his fellow man.

There were little children hold tiny signs reading, ‘Asthma is my birthright’ and the man chanting tonight’s Tuesday puja has to interrupt his conversation with God, to stop and cough every minute, for which I pray, God pardons him.

These days, evening in Delhi falls under a dying, not a setting, sun. Everything about this city is apocalyptic. Which is perhaps why it’s hard to leave it, even though you hate it with a hatred that makes you boil and scream like a denizen. Vegetable wallahs on their morning rounds, shout “The end of the world is nigh!” in Hindi. I’m designing travel brochures that read: Come to New Delhi. Repent for your sins.

For the past three nights, someone has been letting off fireworks from the roof of a nearby apartment building that sounds decidedly not life-enhancing. More like the heralding of the Antichrist. Thunderbolts erupt from unknown sources, inter-smacked with low-flying airline traffic, and no one thinks it’s strange, but me.

Today was the first foggy day of the year, but it was hard to distinguish the fog from the fumes that have engulfed my neighbourhood in the past couple of days. An inordinate amount of construction that a number of us suspect to be illegal (since much of it happens at late hours) sounds like the Devils Workshop through woofers. Pneumatic drills and explosions of dubious origin ring through the night, while the citizen’s dreams, their only escape, are fractured and disturbed. 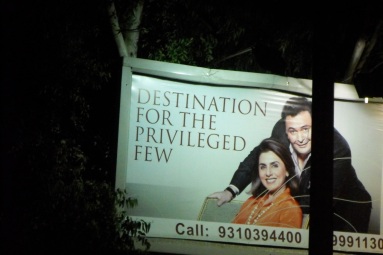 Outside my local convenience store is a cement mixer the size of a humpbacked whale. It has almost completely blocked the entrance to the shop. All of the shop owner’s goods are covered with a thick layer of cement dust, including himself and his mother. And all of this they take with incredibly good grace, even though late night construction is illegal without a permit. They just assume the building owner has paid off the local police. There is even a saying that’s got around for the poor blighters who try to complain to the MCD (Municipal Corporation of Delhi) – a spin on ‘the buck stops here’. It goes: ‘The complaint stops here, but keep passing the buck (under the table)’.

Because I have little better to do, and the end of the world is upon us anyway, I visited the MCD complaints board website: the Elephant’s Graveyard of  building complaints. You imagine these poor blighters actually believing there is a living breathing soul who checks this webpage and/or gives a damn.

Your necessary action is requested again and again…

I have complained again & again about illegal construction…

Sir,
There are large scale violations by the builder mafia in constructions of buildings...

Whether it’s the building mafia or Western-consumerist colonialism; someone must be to blame. So we keep screaming at one another at intersections, because the small infractions seem manageable. Something that a shout across tarmac might be able to fix. At least, at an intersection we can look one another in the eye. While the good citizens of New Delhi keep writing to their municipal authorities, because they have to keep believing that someone out there actually cares.

This sign off from one of the countless letters to the Municipal Corporation of Delhi, is the clue to it all. That, at the end of the world, we are all Delhites.

Oh, and merry Christmas one and all….