A Cork in Time Saves Infinity

Posted on December 30, 2013 by subincontinentia

The rhythmic dipping of the oars in the Ganga was to Sunil the same as the ticking of the Grandfather Clock in her grandma’s hallway. The boat, the clock, the river—were all metaphors for time. The east bank’s eternal fires, Sunil’s bruise purple skin, the sinking temple, the breast-sniffing astrologer, the quiet throb in her left wrist—all merged into a concoction both mysterious and natural.

There is no glorious cosmic design, only the constant inter-weaving of things and conditions, and this itself is both glorious and cosmic.

The dotted piles of decaying marigolds along the ghats, the mumbling saddhus, the weeping widows, the diving children, the reflections on water, all a shimmering astounding masterpiece in motion.

“What are you thinking, Judy ji?”
Sunil leaned on the oars, watching her with fond amusement.
“Oh, so many things,” she replied vaguely.
“I think the Ganga is speaking to you.”

He took up the idle oars again, and again their sloshing metronome sent her swirling back down the rabbit hole. And as she fell, time effectively vanished to her awareness. But that awareness was not merely an absence of time. It was the presence of an alternate mode of apprehension. She had been raised to believe that change was a product of time. No one had actually said this, but it seemed an unspoken axiom. All geology was a lesson in how time spits out change. Over time this or that happened: the earth cooled, continents were formed, ice ages came and went, the Grand Canyon was chiseled, in almost unfathomably large amounts of time. Babies were born and babies died, people fell in love, out of love, judged and forgave one another, determined to live and decided to die—in a moment. And what about those moments of which all those moments are made? The small change of time? But that was for philosophers and physicists to ponder, not your ordinary scrap-book carrying citizens. Otherwise, we wouldn’t get any work done.

Such thoughts flowed from Jude like a stream from some ancient well—sipped by someone in loose white clothes, pressing sand between their toes in the moonlight. In a flash she understood that the ancient Chinese text, the I Ching (Book of Changes), was entirely based on this view, but she still experienced it with all the nascent wonder of an original discovery.

After all, who could argue that change was the fundamental state of all things both physical and mental? It’s not difficult to conceive that we don’t age because of the passage of time; that we age because of the accumulation of countless changes upon our physical being. It is movement through space; just as a year is nothing but a revolution of the earth around the sun.

But isn’t there a moment before and a moment after the present one? Take the act of drinking tea. Surely there is:

But in the time as change scenario it doesn’t work exactly like that. When you kick time out of the equation and replace it with change, then there is only:

But what if you want to talk about drinking tea? The idea seemed rather preposterous in Jude’s non-verbal state, but it was not out of the question, since you might want to say, “Oh, that tea was rather good,” or “When will there be more tea?” which is at least more realistic than asking, “How many pockets of micro and macro changes in this universal web of co-conspired, co-interdependent dynamism will there be before more of this hot wet substance we label with the verbal construct ‘tea’ will manifest to my sensory awareness?” 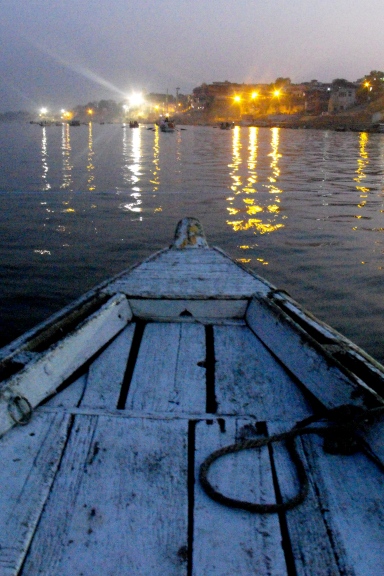 Her mind punched above its fighting weight as she stretched the limits of her own comprehension. She tried to concentrate. Tenses are useful, she thought. It allows us to explain our movements—we need time so we don’t miss trains, make it to the altar, get home in time to watch the new season of Sherlock Holmes. A concept for setting coordinates.

But if time is only a concept then what would timelessness feel like? How is time experienced in pre-conceptual baby brains? She steered her mind back through her book of changes: 45, 44, 43, 42, but got sucked at the age of….eight.

In a copse of fir trees in the corner of the garden Jude sat cross-legged on a mat of fir needles, playing Tchaikovsky’s Swan Lake on a broken music box. The sun was playing a harp of light through the thick branches. She stared at the revolving metal stub where the plastic ballerina had fallen off long ago. And on that stub, a tiny herself, turning, turning, turning…

“Judy ji?”
Sunil’s expression had changed to one of concern. She’d been leaning on her stomach over the stern of the boat, her fingers dragging through the water, eyes fixed on the ripples pouring out like diagrams of magnetic fields from her fingertips.
“I’m okay. I think I’m okay.”
Whatever was going on, it was gaining momentum faster than she could comprehend it, but she wasn’t scared, yet.

Back in the pine tress time had passed more slowly than it did now, or at least it seemed like that. But if, as she was now convinced, change was the x-factor, she found herself looking at it differently.
“It’s all about attention.”
Time doesn’t slow down, doesn’t speed up. That’s the job of the twin time-keepers; Novelty and Habit.

Time seems to pass more slowly as a child because the world is still fresh. Novelty captures attention and attention slows time down. It keeps you in the present. Habit or familiarity is the great accelerator, as the mind slips off the things it already thinks it knows. Curiosity keeps time at bay by re-focusing attention. Boredom and cynicism are time-eaters. They speed up any life, can make it seem like it is not even being lived, only passed through…

Jude could not have felt more still than if the world had stopped rotating on its axis. Everything began to merge into a single point. She thought she might fall into the river and instinctively gripped the sides of the boat.

Time is another sense, like sight or taste. There is a noise that accompanies time, the kind that you can’t hear, but which keeps your perception operating a certain way. When you step out of time that background noise ceases like when there is powercut and you feel suddenly connected to some other way of knowing. Like a fence has come down and you can see far into the distance…

Jude gazed out in the direction of the ghats. Sure enough they weren’t passing any more. It was strange how the river current kept running while the boat remained stationary. Like a special effect in a low-budget children’s movie. Sunil had pulled in his oars long back, enjoying the gentle sleight of hand of Mother Ganga as well as Jude’s philosophical shenanigans. The prow was turning anti-clockwise at an almost imperceptible rate.

Jude leaned a little over the side and studied the distinct circularity of the surrounding water in which they had become temporarily trapped. It’s a time machine. She laughed at the thought.
“It’s a time machine.”
“It’s the stopper of time.”
Sunil laughed with her.
“My boat is now a cork in time!”

Jude imagined a giant rubber plug inserted into a giant egg timer, bringing the flow of sand to an abrupt standstill.
“Does it happen a lot?”
“Not a lot. Sometimes.”

Jude lay down again, face up to the brightening stars that were ever so slowly rotating above them. Below their gaze, this splinter of wood revolving in a thread of dark water was the hub of the known universe—the point around which it all revolved, and never went anywhere at all. But for a time—no, for a change—she had been allowed to see how it looks from beyond the wheel’s rim. Sunil picked up the oars, leaned back at a 45 degree angle, and began to sing, Maano To Main Ganga Maa Hoon.