The shipping forecast: moderate or good

Posted on January 9, 2014 by subincontinentia 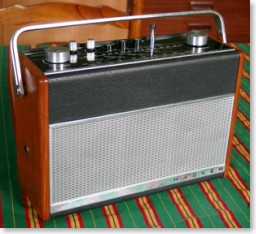 My mother was an avid radio listener, loyal to ‘The Archers’ and most of BBC Radio 4, and would turn on the radio when she was cooking or sleeping. As she got older, she cooked and slept less, but the radio remained a constant reassuring presence.

I lived in California for the last 20 years of her life, visiting once a year at most in the beginning, but more often towards the end. She had trouble sleeping, and would put the radio on when she turned off her bedside lamp. I was always jet-lagged for the first week of any visit, and would come to bed around 2 am to find her dozing peacefully to live reports of bombings in Baghdad or a humanitarian crisis in the Sudan. I always found something so touching about seeing my mother sleeping; tufts of auburn hair sticking out from under the duvet, with the radio blasting all the troubles of the world.

I’m fairly certain that it was a Hacker RP72 Sovereign III, which came on the market in 1973. Now considered vintage, at the time it was state of the art. As an RAF family, we moved around a lot, and every couple of years everything would change; the house, the school, the neighbourhood, my friends. So as a kid I always paid close attention to the things that didn’t change. They were marvels to me, those unchanging things. My mum’s Hacker radio was one of them. Even when she bought a bedroom radio in the 1980s she kept the Hacker. It had separate dials to adjust the bass and treble (I recall a few slapped hands when I twiddled them) and the Long Wave option captured the bass and clarity of the announcer’s voices perfectly.

During my jet-lagged weeks, when late night television became unendurable, I would make a cup of tea and a couple of slices of toast and marmalade, and sit on the kitchen stool in the dark listening to that radio. Often, the only thing on at that time was the Shipping Forecast, a weather broadcast for the coastal seas off the British Isles produced by the Met Office. The 00:48 broadcast of the Shipping Forecast was always preceded by a few bars of the bubbly tune ‘Sailing By’, but the content is read straight, with no background or interruptions, and sent out on Long Wave as well as FM since the LW signal can be easily received at sea.

For those whose lives don’t depend on it, the Shipping Forecast is an endearing mixture of poetry and code. With a maximum word count of 370 there is almost no room for variation in the script. The steady measured pace of the delivery is intended for sailors to hear it easily and to have time to write it down, but with the unintended effect of producing a rhythm and tempo that is utterly mesmerizing. For those at sea it is potentially life-saving information. But for me, grabbing a sense of home for few weeks a year, it was the sound of a kind of soothing familiar peace. It’s only recently that I’ve discovered that the Shipping Forecast has made a similar impression on many others, and I feel a kinship with them as if we’re fellows of an unofficial society of romantic code-breakers. 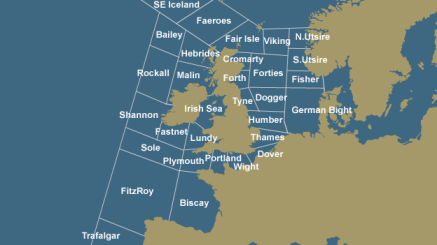 The broadcast contained repeated phrases such as ‘moderate or good’, and Edward Lear-esque terms like ‘expected Norwegian basin’ and ‘becoming cyclonic’. Lyrical names of sections of sea; North Utsire and South Utsire (pronounced Üt-SEAR-ra and always mentioned together), Dogger, FitzRoy and German Bight (that I heard as ‘German bite’) caught the imagination much like Narnia or Avalon. But it was about half way through the broadcast, with reports from the coastal stations, that things would begin to get seriously hypnotic. After every sentence, starting with stupendous names like ‘Sandettie Light Vessel Automatic’, the announcer would pause momentarily and then end with, ‘falling slowly’, ‘now falling’ or sometimes simply ‘falling’. I assume there must have been the occasional ‘rising slowly’ or ‘now rising’ but I can’t remember hearing it. After a few minutes of this, I would begin to feel drowsy and trundle off to bed, falling slowly to sleep.

For years, I’m certain it was the same announcer, the kind of comforting woody BBC voice it would be nice to hear in rough seas. Later, the announcers seemed to change quite regularly, with regional accents and even (god forbid) a woman. There’s a character in a Peter James novel who recites the shipping forecast when he can’t think of what to say. I must say I find this rather appealing. When someone asks how you are, you could reply “becoming cyclonic” or “falling slowly”. And if that doesn’t cut the mustard you could just stick with the old sailor’s standby—“moderate or good.”

NOTE: (Only those already familiar with the Shipping Forecast will find the Brian Perkins version funny, below)

5 Responses to The shipping forecast: moderate or good