Posted on January 14, 2014 by subincontinentia

Two years ago, I was surfing the inter web in my apartment in Dharamsala, a hill town in northern India, while researching an article on Tibet. I happened upon a still from a silent movie that made me stop in my keyboard-tapping tracks. The image was of a young woman with long dark hair and ruffled dress crouching before a statue of the Buddha. I paused for a few moments, utterly captivated. But I moved on—assuming that I would manage to find it again. I didn’t. Until now. 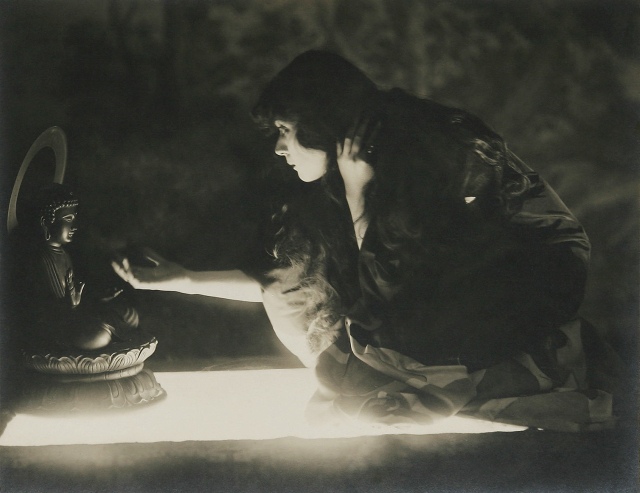 Last week, I went to dinner at the house of a friend who lives in North London. In the context of our discussion on Buddhism and Western culture, I mentioned the photo along with my disappointment at not having been able to unearth it since. When my friend’s son assured me he could find it, I tried to disguise my skepticism. But sure enough, yesterday, he emailed the same image to me along with two others I hadn’t seen before. The actress is Theda Bara, who in her day was as famous as Charlie Chaplin. She was Hollywood’s first sex symbol, aka ‘The Vamp’, who famously said: “To be good is to be forgotten. I’m going to be so bad I’ll always be remembered.” The film is Soul of the Buddha and it was made in 1918. When I Googled it, I was crestfallen to read the words ‘now considered lost’.

The Wikipedia entry is about as sparse as it gets.

The Soul of Buddha was a 1918 American silent romance film directed by J. Gordon Edwards and starring Theda Bara who also wrote the film’s story. The film was produced by Fox Film Corporation and was shot at the Fox Studio in Fort Lee, New Jersey. It is now considered lost.

Fandango’s plot summary (the only one I could find) reads:

Obviously inspired by the then topical Mata Hari espionage case, this drama presented the screen’s leading vixen, Theda Bara, as a Javanese priestess who elopes with an English military officer (Hugh Thompson). Like Mata before her, Bara’s Bavahari becomes a celebrated dancer but is murdered onstage by a vengeful Buddhist priest (Victor Kennard). None of this made much sense, but Bara melodramas were never strong on character motivation or logic. The Soul of a Buddha was filmed in the dead of winter at Fort Lee, New Jersey, a paper mache temple and the palisades standing in — uneasily — for tropical Java. ~ Hans J. Wollstein, Rovi

‘Obviously, Fox was not worried about offending Buddhists,’ writes Eve Golden in Vamp: The Rise and Fall of Theda Bara. The studio ‘suggested that theater owners scatter “Hindu Death Signs” and statues of Buddha around to add to the general atmosphere.’

Golden disputes the claim that Bara wrote the script, suggesting that this was part of the publicity for the film, which include Bara attending a Buddhist ceremony and claiming that she’d converted to Buddhism. Golden thinks this unlikely, though Bara did make off with the Buddha statue at the end of the production. The film was panned by critics. Mae Tinee called it “a sodden conglomeration, entirely uninteresting and unoriginal, with Miss Bara finally dying an air-clawing death.”

The director, J. Gordon Edwards, made over 50 films for Fox Studios. He was also the step-grandfather of Blake Edwards (Breakfast at Tiffany’s, Days of Wine and Roses, The Pink Panther). He died of pneumonia aged 58 and was interred in a private mausoleum designed to look like the Taj Mahal. Edwards directed all of Theda Bara’s films from 1916 to 1919, which were mostly destroyed in a fire in 1937.

Bara’s revealing costumes seem incredibly riské for their time, but her films pre-dated the introduction of the production code. She and her colleagues operated in a creatively liberal twilight period, untroubled by film censorship. Fan magazines called her “The Arch-Torpedo of Domesticity,” “Pugatory’s Ivory Angel,” “The Serpent of the Nile”, “The Devil’s Handmaiden,” “The Priestess of Sin” and “The Queen of Vampires”. Bara described herself as having “the face of a vampire, but the heart of a feminist.” Fox studios, eager to flame the mystic fires, claimed that she was born in Egypt, the daughter of a French actress and Italian sculptor (her actual parents were a Jewish tailor and Swiss housewife), and that she had been raised in the Sahara Desert next to the Sphinx. 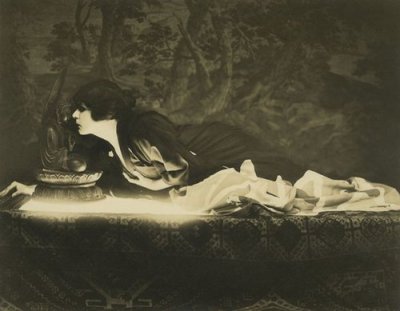 It doesn’t sound like a particularly good film, but Soul of the Buddha is part of an intriguing genre of Buddhism in popular Western culture. That the heroine is killed by a Buddhist monk, yet the stills depict her in a kind of tender awe before a Buddha image, seem to speak to the West’s ambivalent attitudes to the Orient—fear and suspicion hand in hand with romantic fascination.

And this was all, as Bara herself pointed out, in a time before movie audiences had tasted the serpent’s apple and had “destroyed the grand illusion” that what they were seeing on the screen was actually real. The phrase brought to mind how the Buddha, 2,500 years ago, taught his followers to destroy the “grand illusion” of the reality of a separate independent self.

I ask myself why I’m so drawn to the image of this silent film actress and the Buddha. My progressive friends would happily write it off as an example of Edward Said’s Orientalism. But perhaps that itself justifies an even deeper contemplative framework. There is something in the way that Bara’s hand reaches out to the statue; tentative yet compelled by some silent force. A longing as yet unread. For a new direction. For a turning point. This image is undoubtedly about our relationship with the ‘other’. But it is also about our connection to ourselves.

10 Responses to Soul of the Buddha: Now considered lost